On Friday 15 July, at 11 a.m., a contract signing ceremony will tooke place at Palazzo Lombardia between the International Astronautical Federation (IAF) and the Associazione Italiana di Aeronautica e Astronautica (AIDAA), which has been appointed to host the 75th edition of the International Astronautical Congress (IAC) – the most important global event in the Space sector – in Milan, Italy. A letter of intent was also formalised during the ceremony in which the Agenzia Spaziale Italiana (ASI) and Leonardo will commit to supporting AIDAA in organizing the IAC 2024 in Milan.

The candidacy of Milan, which was declared the winner in October 2021, was promoted by AIDAA, ASI and Leonardo, respectively representing the Italian academic world, institutions and space industry, and enjoyed the pivotal support of the Italian Government and local institutions, in particular the President of the Lombardy Region and the Mayor of Milan. 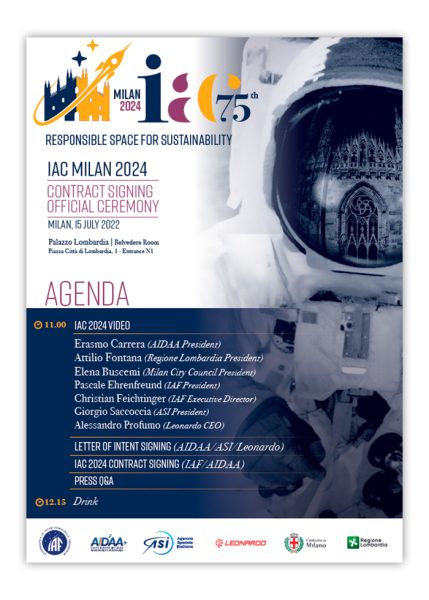 Under the motto “Responsible Space for Sustainability”, the intention of the IAC 2024 is to highlight the importance of Space as an environment that must be kept secure and open to exploration, peaceful use and international co-operation by present and future generations in the interests of the planet and all nations, regardless of their level of development and without discrimination of any kind. With this aim more than 8,000 experts from space agencies, companies, research centres and associations from across the world will meet at IAC 2024 – organized with the contribution of AIM Group International – in the Milano Congress Center (Allianz MiCo), Europe’s largest conference venue.

There are currently just under 8,000 satellites in orbit, around 5,000 of which are operational, and this number is set to grow significantly in the next few years. Ever more countries and public and private players are becoming actively involved in the space economy. The Earth’s orbit is nonetheless a limited resource, and any overcrowding involves risks in terms of security, light pollution and the availability of data and services provided by space technologies. In the economy, industry, agriculture, transport, energy, finance, urban development, communications, environmental monitoring, and security, space systems are a fundamental tool in the creation of a more digital, green and sustainable future. They are likewise vital for the functioning of society, the economy and global trade. Italy is at the forefront in the challenge of using Space responsibly in the name of sustainability. It is one of the few countries in the world with a complete Space economy supply chain: from manufacturing, through new applications development and satellite services management, to propulsion and launch systems. The country’s expertise can be found in the research sector and in companies of all sizes, from start-ups and SMEs to large-scale industry, supported by the institutions. All will come together on 15 July to confirm their commitment to supporting IAC 2024.

◄ 1 2 3
We use cookies on our website to give you the most relevant experience by remembering your preferences and repeat visits. By clicking “Accept All”, you consent to the use of ALL the cookies. However, you may visit "Cookie Settings" to provide a controlled consent.
Cookie SettingsAccept AllReject All
Manage consent